Interior designer Kasey Hudson of Truckee’s Hudson Design walks around the Beck family retreat in Martis Camp as she points to various materials, furnishings and fixtures. “Everything has a story,” she promises.

The story begins with Olivia and Grayson Beck, who live fulltime in Davis, California, with their four boys, ages 14, 12 and 7-year-old twins.

The Becks were sold on the Martis Camp lifestyle, but wary of building a home. “We didn’t want one of the 8,000 square foot mammoth houses,” says Olivia. Indeed, the home spans less than 4,000 square feet—modest, by Martis Camp standards. “We really wanted a place that wouldn’t be overwhelming,” she continues. “Something sweet and cozy for our family, some place where we had to be together, where no one could hide.”

The Becks contacted Tahoe City’s SANDBOX Studios to draw up the plans. Grayson started making inquiries to contractors for bids on the project. He ended up on the phone with Tony Hardy, of Truckee’s Tony Hardy Construction. “Within five minutes, I told him he had the job,” Grayson says. “I didn’t want to worry about it and I knew that he would look out for us. He’s probably the most high integrity guy you’ve ever met. He had great creative input; he took our ideas and made them better.”

The project began in fall 2011 with the final details trickling into the beginning of 2013. Over the course of the year-plus long project, the Beck family spent countless hours with Hardy; Kasey and her husband/project manager of Hudson Design, Bill; building designer Scott Gillespie of SANDBOX; and Homewood-based furniture maker Barclay Moore, among other artisans. They’d get together for dinners, to play with the kids, for shopping trips and weekly meetings.

During these regular gatherings, the family’s priorities as well as individual preferences emerged: the boys’ love for riding motorcycles, the need for durable, rough-and-tumble materials, Olivia’s fondness for polka dots and the beauty of the small metal heart stents that Grayson cuts for a living.

“Every artisan wanted to know who we were, what we liked, what was interesting to us,” says Olivia. “It wasn’t just another house; they were building something special, an art piece.”

“The meetings were paramount,” says Gillespie. “Putting things on plan is just the beginning—you need to get to know the owners, how they live and what’s important to them to really be able to personalize the design.”

The kitchen offers just a taste of the thought and consideration that went into the home. The bar stools, designed by Moore, resemble motorcycle seats, with Harley parts and gas caps. The backsplash, made of round tiles, nods to Olivia’s love of polka dots—and, on closer inspection, contains surprises: a Beck’s beer bottle cap, shotgun shells, marbles and ceramic thumbprints made by the twins. “Kasey was the one who initiated the backsplash,” says Olivia. “She told us to give her stuff from the boys, stuff from our sons’ lives. It was really a creative gesture.”

The light fixtures over both the kitchen island and dining room table were designed in much the same way.

“Kasey and I went to a light fixture place,” recalls Olivia. “By the end, my eyes were rolling back in my head. I said, ‘I can never look at another light fixture again.’” So Kasey found a better solution. S  he asked the Becks to contribute pieces, including a family brooch and other heirlooms, and took them to a bead artist in Truckee to be hand-woven into the fixtures. The most interesting pieces, however, are Grayson’s stents, normally surgically implanted into an artery. “Grayson gave me the heart stents and they were sparkling in the sun,” says Kasey. “I thought, ‘These are beautiful.’”

“Those are the most important thing because it shows how we started as a family,” says Olivia.

One of those fixtures sparkles over the dining room table, which is crafted from a large slab of black walnut. “We built a big house in Davis,” says Grayson. “When we were doing it, we came back to the town where I grew up.” One day, he noticed a big black walnut tree—one he often bicycled past as a child—being cut down. When he realized the workers were removing it without any use in mind, he asked if he could have it. “It was 52 inches across and 12,000 pounds,” he says. He returned with his tractor and hauled it away “all four tires spinning.” He got the tree home, cut it into slabs and forgot it for the next seven years. When the Becks began collaborating with Moore, Grayson mentioned that he’d like to use the wood. Moore transformed the slabs into artwork. Saw blades rise out of end tables; a pocket in the wood—which some may have dismissed as a flaw—transforms one piece into a game, a secret place to store pennies and other treasures.

The stories continue throughout the home. In the powder room, marked by a crescent moon, bronze drippings from an Alaskan artist embedded in the floor complement a bronze sink. Tobacco barn wood was used for the flooring, train car decking on the ceiling, red barn wood for some of the interior siding and recycled Wyoming snowfence for interior wainscoting. COR-TEN steel came from Truckee’s “red light district,” and the exterior wood came from a string bean farm in Idaho.

“When we built the house, we had requested it was all real,” says Grayson. “Sometimes you get the foam, plaster, paint; that’s not what we wanted. Everything we wanted was real. You want a beam so you made it out of a beam. We wanted it with history. We have a piece of lumber that’s 150 years old. It feels different.”

On the way to the master suite, a visitor passes the office sectioned from the hallway by corrugated wired glass panels formerly used as a tennis court ceiling. In the master bedroom, Moore mixed the wood from the Wyoming snowfence with the black walnut to create the bed and nightstands. The bathroom, which Kasey says Olivia requested as “eclectic and feminine,” features a sparkling light fixture over the bathtub, recycled crushed glass in the vanities, penny tile in the shower (again speaking to Olivia’s love of polka dots). The master fireplace is modeled after Davis’s famous water towers.

Downstairs is what Kasey calls the boys’ lair: a  game room complete with a large TV, a computer station, an MMA training bag (the boys practice karate) and a rock climbing wall installed by a former pro rock climber. The Beck sons can partition off the four bunks for a space of their own, each full of nooks and crannies, shelves and drawers, and cubbies with outlets to plug in various electronics. The boys’ bathroom, an ode to a locker room, boasts two showers and a trough sink. Beyond the boys’ room, a guest room with a bed plus a bunkbed can accommodate another family. Fringe and polka dot accents balance the room against the masculinity of the neighboring “lair.”

Though adamant about keeping their home personal, the Becks also wanted it to stand out in the Martis Camp community. “I pushed both Kasey and Tony,” Olivia says. “I said, ‘if you are putting this in somewhere else, I don’t want to see it.’”

The four-sided great room fireplace is a perfect example. The Becks wanted a patchwork of metal, without “rhyme or reason,” says Olivia. “The metalwork had to be something unique. We wanted it to be an art piece in the middle of the house.”

The metal patchwork reminded Hardy of the riveted panels of a ship’s hull, and he began looking for old ship plate. “Grayson would show us a little bit of what he wanted, then he would say ‘You know what I want, so let’s see what we can do to pull this off.’ We’d have a bunch of different guys come up with different methods of achieving metalwork.”

Though using ship plate didn’t pan out, Hardy took the idea to Truckee’s Hunter Metal, which created some mock-ups based on the ship hull theme. “They came up with the final idea and executed it and it turned out great,” he says.

“It has the look of a locomotive boiler,” says Bill. “Like you could shovel coal into it.”

Metalwork features prominently in the home. Grayson, a metal cutter by trade, also works with the medium creatively. He designed a metal workbench in the garage, while a friend of his did the exterior metal railing. Truckee’s Mountain Forge created much of the creative detailing, such as hardware and door décor. 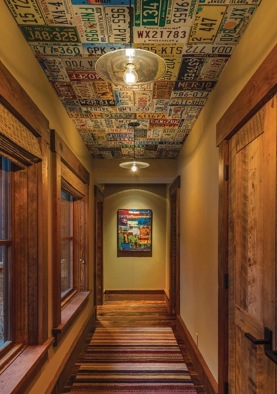 On the opposite end of the home from the master suite, colorful license plates—rectangular jumbles of letters and words—paper the ceiling of the hallway leading to the garage. “They really wanted to use license plates,” says Kasey, noting that 49 out of 50 states are represented. Near the center, a Hawaiian license plate reads “BELIVE.” “When things had gotten really crazy, we put this up on the mantel,” says Bill. “Believe this is going to work.”

Even when the job seemed overwhelming, the cooperative effort helped everyone to continue. “Grayson really pushed us,” says Kasey. “He was really encouraging and had all the confidence. It was a really great team effort.”

Ideas surfaced throughout the course of construction. “Grayson would come up every week, rain or shine,” says Bill. “Each week, we’d build upon that creative energy.”

“The collaborative effort was so key for everyone,” agrees Kasey. “We all listened and explored and bounced ideas off each other.” One such idea was the front door. “They would show me a picture of a door, I’d draw it, get it approved, then pass it on to the metal workers at Mountain Forge,” says Kasey. The result—a large red front door with unique custom details—made it as much an art piece as an entryway.

Creative touches abound throughout the project. In the game nook, a leather rug adorned with hand-sewn cowhide letters became a ceiling accent, like a giant, upside down game of Boggle. The zinc in the kitchen countertop and hood will add interest as it ages. Moore created the vanity in the master bathroom and modeled it after one owned by Bill’s grandmother. In the laundry room hangs a thick glass light fixture originally from an 1860s Tahoe cabin. While antiquing, Kasey found old glass pulls she used to give character to dressers and cabinetry. Railroad lights feature prominently in the locker/mudroom.

Outdoors, the ship’s hull patterns repeat in the fireplace on the covered deck. The fire pit outside the boys’ room contains a metal rock crusher—resembling a giant peppercorn grinder—that the Hudsons found in Hawaii and had barged and then shipped to the site. Hudson Design built the Adirondack chairs in Truckee.

“It’s a fun house,” says Kasey. “It’s a house that you’d really want to live in. It doesn’t make you feel like you need to guard yourself.”

Of all the stories in the home, perhaps the most important—or at least, the one repeated over and over by the various participants on the project—is collaboration. Between the craftspeople, designers, homeowners and the builder, this home is a story of mutual respect, communication and creativity.

“We were all equally invested in the project and working toward a common goal of getting the client what they wanted,” says Hardy. “Sometimes it works, sometimes it doesn’t; this one, we hit a home run. It was a super experience—a really enjoyable, rewarding experience.”

“I can tell you that Kasey is super talented,” says Grayson. “So was Barclay. Scott from SANDBOX did all the design. And Tony was the guy who really pulled it together.”

It may seem that once they finished the project, the story would end. But for the Beck family, this house—a collaboration of immense talents—marks a new beginning, of new stories just waiting to be told.