If there were any doubts Katrina Jackman’s Martis Camp home, located between holes 5 and 6 on the putting green, was the perfect retreat for family and friends, its ultimate test was this past New Year’s Eve, when 30-some kids, along with Jackman, her husband, Worthing, and their adult friends, rang in 2013 at the house.

“You should see the Facebook album,” Jackman laughs, describing how girls stayed upstairs while 18 boys slept on tarps placed over the heated garage floor.

Jackman, who has 18 and 17-year-old sons and an 11-year-old daughter, had been a ski team mom commuting from Sacramento for years before the family decided to buy a place in Tahoe. She originally wanted a condo, but a tour of Martis Camp quickly changed her mind. When the lot, a cabin site high enough for a view of Northstar California’s slopes and located near the Lost Library and Family Barn, went back into inventory in April 2011, the Jackmans purchased it that week. “I love that we’re on an amenity, but we’re kind of on all of them,” she says.

One of Worthing’s coworkers recommended Scott Gillespie of the Tahoe City design firm SANDBOX Studio, who drew up plans for the home in three months. “Scott was so easy to work with,” Jackman says. “He took everything we wanted to Martis Camp. We gave in on a few things, but we won most.” Mark Tanner Construction built the home in less than a year.

Size constraints proved the initial dilemma. “We needed five bedrooms in under 3,000 square feet,” says Tanner. The design team was forced to economize space and maximize efficiency. “There’s an incredible amount of function for that size house,” Gillespie says. 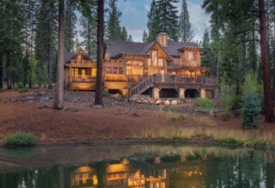 Guests enter the five-bedroom, five-bath home into a lofted great room. The open kitchen includes a large island with bar seating, a breakfast nook and formal dining area. Large windows frame an enormous pine tree outside and dramatic light fixtures complement the breezy white and beige color palette. White wainscoting throughout the home harks back to Jackman’s New York childhood, when summers were spent on the Cape. The exterior, a mix of reclaimed trestlewood from the Great Salt Lake and corrugated metal, trimmed with a rough-cut Douglas fir, is a nod to time spent in the Adirondacks. Worthing’s hometown of New Orleans is reflected in the bright reds, yellows and greens of accent walls and furnishings. “It feels like us,” says Jackman.

Indeed, the home is a compilation of the family’s lives and experiences. Furnishings are pulled from the many houses the Jackmans previously inhabited—chairs from an El Dorado home, tables from their American River residence. Jackman’s own paintings decorate many of the walls.

Designed with adult children in mind, the home features a heated sleeping porch, which Jackman describes as “the most wonderful thing in the world,” complete with a full-size daybed; the room connects to the small porch off the master bedroom, which Gillespie pushed out to make large enough for four deck chairs. The main floor bathroom is accessible from both the hallway and the guestroom and includes a zero-clearance shower and commercial drain for water; a door from the shower leads to the deck and its hot tub.

Jackman was adamant wayward clothes, gear and games stay off floors, and to that end, the home pays homage to innovative storage and de-cluttering solutions. Drawers pull out from under beds, benches, even under the fireplace, while built-ins maximize storage space. A bunk and media room sleeps eight in four full-sized bunks; each headboard doubles as a bookshelf, complete with outlets to charge phones and other gadgets. In the boys’ bedroom, twin beds set on castors can be rolled together to form a king. The heated garage features lockers for ski gear while outdoors, a lower deck and fire pit area seats 12. A dog run provides a safe space for the family’s two 15-pound dogs.

Whimsical touches abound. A tanzanite granite slab topping the kitchen island has a “mountain” visible in the rock. The sleeping porch includes colorful adornments like croquet sticks and children’s blocks, and throughout the home are rustic touches such as sugar pinecones, moss-covered branches, and old sleighs and skis. (“Katrina bought out every heritage antique sled in the Tahoe area,” says Tanner. “It was a push for the local economy.”)

Even with the profusion of family-friendly features, one may still wonder how the Jackman residence survived 30-some partying teenagers over the holidays. “Only one thing broke,” Jackman’s 18-year-old son, Cabot, shrugs. “The house is upright.”