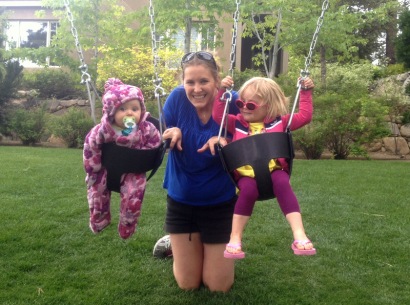 What to do, what to do? I’m trying to figure out what to do with the girls. Jason has been on a three-week hiatus as he switches jobs and It’s been wonderful having him to entertain them, but with him starting work again on Monday, they become a lot to handle all day every day. We checked out the Methodist preschool just down the street, which is a half-day program that starts in mid-August. When we went in, the director told us that she has only one spot left, for Tuesdays and Thursdays. She’ll hold it for us till the end of the week, so we have till then to decide. Pros: I’ve heard really great things about this school—they hatch butterflies and chicks, take science walks, learn responsibilities and incorporate “Jesus time” that Nora wouldn’t get at her heathen household—and it’s only three minutes down the road. Cons, it’s only four hours, twice a week. Which is a nice little intro to school, but for my sanity level, it’s not a ton of time off from my always-wanting-to-play firstborn. Plus, I thought that if Audrey was going to go to daycare, it would be nice if they could go somewhere together. Nora hasn’t been real big on going to her in-home daycare lately, and I don’t blame her: It’s hit or miss if she’ll have friends her age on any given day, and I’m about done because it takes 25 minutes to get there, which means I spend almost an hour of Nora’s day in daycare in the car. Still, Mercedes is super nice, she’s flexible with our schedule, relatively cheap (though it would still be $70/day) and the girls would get to be together.

I tried calling some centers with daycare and preschool, but they are crazy expensive (like close to $400/three times a week for both girls). I work and write when I’m babyless, but since I’m just freelancing, it’s pretty impossible to justify spending $400 per week when I may only do $75 worth of editing. The cheapest place is Next Generation Kids, which I loved because they teach in Spanish, but since Nora already had a breakdown there back in January (long story) I don’t think I have the heart to try again. I could look into getting a babysitter a couple times a week here, but part of the appeal was them getting to socialize with kids their own age.

This entry was posted in Babies, Family life. Bookmark the permalink.